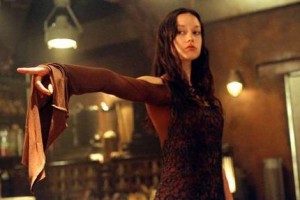 I’ve been having some fun thinking about the Bechdel test lately, specifically how many of my favorite sci-fi and fantasy films would pass it. To pass the test a movie must (a) have two women in it who (b) talk to each other (c) about something other than a man.

END_OF_DOCUMENT_TOKEN_TO_BE_REPLACED

It looks like New Line lived up to my previously-expressed hopes: they resolved their dispute with Peter Jackson, so he’s going to be writing and producing two Hobbit films. According to an Entertainment Weekly article:

It’s back to Middle Earth for Peter Jackson, Fran Walsh, and the boys from New Line. Finally, the years of disputes have ended, and the partners (including co-producer and co-distributor MGM) are gearing up for two new Hobbit movies.

Jackson and his life/creative partner Walsh have always envisioned the big-screen adaptation of The Hobbit as two movies. The first would deal with the 80-year old novel. The second, imagined entirely by Jackson and Walsh, would link the conclusion of The Hobbit to the start of the first Lord of the Rings book, The Fellowship of the Rings. New Line and Jackson will develop the properties over the next year with hopes of entering into pre-production by 2009 for a 2010 and 2011 release.

So we can all do the dance of joy and then wait impatiently for 2010. Yays!