In case you missed it:

We have a space station in orbit. You can see it as it passes overhead. People have lived there for over a decade. From what I’ve read, living there is a pretty magical experience.

There are two commercial companies launching regular cargo shipments to the space station, plus cargo launches by the Russian, European, and Japanese space agencies.

People still have to ride a Russian rocket to get to the space station. A few commercial companies are working on better ways to get there.

The space station has a cannon that launches small satellites into orbit, including bunches sent up on commercial cargo flights. One company is launching 30 earth-observing satellites at once, because they can.

There’s a nuclear-powered robot on Mars. She’s been there for over a year. She occasionally tweets selfies. She joined a solar-powered robot that’s been roving for over a decade. Another robot just landed on the Moon, the first one in a long while.

At least one commercial company is flight testing their passenger rocketships. Another is hot on their heels. We’re all impatiently waiting for flights to space, including hundreds of ticket holders.

One of those cargo-launch companies launched and landed the ten-story-tall first stage of its rocket. On its tail. Eight times.

An asteroid-mining company is using crowd-funded money to build their first asteroid-finding space telescope. It will also take selfies.

We now know of over a thousand planets around other stars. (You can help find more, or just get updates on your phone.) We have a photograph of at least one of them. There’s a new telescope to take photos of a lot more.

When you look up at the sky tonight, count 25 stars. (It’s easy, because there are millions in view.) One of those 25 is a Sun-like star with an Earth-sized planet  in the habitable zone, according to our best estimates.

There’s more going on than I can even list in an overview. A decade ago, most of this was science fiction. Welcome to 2014, when space is awesome.

Sometimes I need to work out a rough calculation to check whether my idea of something science-fictiony has any basis in reality. It doesn’t need to be super-rigorous*, but close enough to tell if my conception is way off the mark.

In this case, I’ve been thinking about how it might feel to walk around a city on Mars. It’s likely to be mostly underground to help shield against radiation, but there should be as much daylight as possible to save energy. On Earth, that kind of daylighting comes from skylights, windows, and (my personal favorite) light tubes.

But what about on Mars? Mars is farther from the Sun than Earth is, so it gets less light on the surface, but how much less? Is walking down a Martian street destined to feel like a gloomy overcast day?

First I had to get a grip on how to measure daylight. An obvious comparison is solar radiation, measured in Watts per square meter. Depending on time of year, Mars gets between 1/3 and 1/2 as much solar radiation as Earth, because it’s about 50% farther from the Sun. That’s handy for figuring solar power output, but the human eye isn’t so linear.

Another way is illuminance, measured in lux. Though the exact conversion factor between solar radiation and lux is a bit tricky due to the eye’s reaction to different wavelengths, I gather that the relationship is linear. Thus, using some standard Earth values and scaling them:

(I’m assuming that indirect daylight is scattered as well in Mars’s pink sky as it is in Earth’s blue. Something to check later.)

Filling in a few other Earthly values for comparison:

So it looks like daylight on Mars wouldn’t look too different from daylight on Earth. It’s orders of magnitude more light than during “golden hour” on Earth, which is plenty to get around by. It would probably feel like a partly-cloudy day, since there would be more light than even the brightest overcast day, with sharply-defined shadows.

For daylighting, this probably means that Martian interiors would need twice as many Solatubes to get the same level of illumination, but we’re still talking about a fraction of the available daylight. In other words, using Earth-style lighting techniques should keep a Martian city street from feeling gloomy.

*Note the use of Wikipedia sources. Kids, don’t use Wikipedia as a source if you want anyone to take you seriously.

On March 11th, 2012 in Austin, TX at the SXSW Interactive conference, I had the privilege of being on a panel of space enthusiasts called “How to Win Friends and Influence Space Exploration“. You can listen to audio of the panel at the SXSW site. 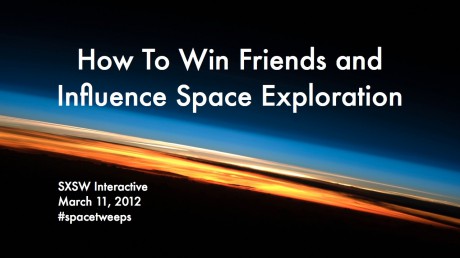 The panel was fun, and I put together a slide show to serve as spacy background for it. Those slides are big and unwieldy because they have huge images and video, but you’re welcome to have them if you’d like:

I might try to put the audio and slides together somewhere so you get the full effect, but that’s going to be a pain. If someone with better skills than me would like to do that, you have my blessing. Please send me the result if/when you post it so I can link it in here.

If you’re in Southern California on January 5th, you might get a chance to see two space stations in the sky at the same time. (Pretty cool, right?)

If it’s clear enough, and if I’ve read the magnitudes and times and directions correctly on Heavens Above, here’s what I’ll be doing that night:

Thanks to Allan Manangan for passing along the news from David Dickinson on Twitter.

I had to post this in response to the flurry of rumors around NASA’s announcement that this Thursday they will “discuss an astrobiology finding that will impact the search for evidence of extraterrestrial life.”

The rule is simple: When you tell a child anything, they will ignore most of it and leave only the words that benefit them.

No, don’t run into the street.

Blah blah run into the street.

We’ll go to the zoo if there’s time after the store and lunch.

If you clean your room, you can borrow the car on Saturday afternoon.

Blah blah you can borrow the car blah blah.

NASA will hold a news conference to discuss an astrobiology finding that will impact the search for evidence of extraterrestrial life.

…and there you go. Good luck on Thursday, guys.