It’s hard for me to tell how prominent a story like this is, but I’ve been reading a lot about ABC’s terrible conduct of the April 16th Democratic presidential debate. The questions were trivial and slanted, the candidates were shocked at their banality, and by the end of the show even the audience had turned against the moderators.

That saddened me, but the first glimmer of hope came from Jon Stewart’s hilarious response:

The first hour of last night’s debate was a 60 minute master class in questions that elevate out-of-context remarks and trivial, insipid miscues into subjects of natural discourse…which is my job! Stop doing my job! That’s what I’m here for! I’m the silly man!

What really saved it for me was the overwhelming response from journalists, who banded together to write an open letter blasting ABC’s debate tactics.

We, the undersigned, deplore the conduct of ABC’s George Stephanopoulos and Charles Gibson at the Democratic Presidential debate on April 16. The debate was a revolting descent into tabloid journalism and a gross disservice to Americans concerned about the great issues facing the nation and the world. This is not the first Democratic or Republican presidential debate to emphasize gotcha questions over real discussion. However, it is, so far, the worst.

I hope this encourages better debates in the future, or at the very least a move to debates sponsored by neutral parties interested in facts instead of media moguls looking for ratings.

The Independent has a great interview with Russell T Davies, the executive producer of Doctor Who. He talks about Richard Dawkins, (pan)sexuality on the show, the new companion Donna, and a bunch more:

The Doctor makes millions for the BBC, so perhaps it should listen to Davies’s anger about the time it is now being shown – 40 minutes earlier than before, at 6.20pm. “It’s a shame. It’s a terrible slot. We will lose viewers. I am unhappy. We’ll see.” Expect to see it moved back, later in the run.

Other sci-fi writers make a point of praising their hardcore fans, but Davies can be very rude about them (look away now, Whovians). “It’s like having a swarm of fucking mosquitoes buzzing around you. It doesn’t stop you doing your job, but, Christ, they buzz!”

There are a few spoilers, but they’re more intriguing than revealing, certainly not worth avoiding the interview. We watched the first episode of Series 4 over the weekend, and I’m excited to see where it leads. 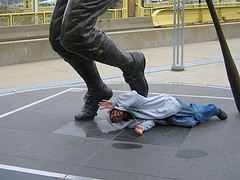 Rather than post a bunch of (LOLized) individual articles, here is a rolling list of some of our favorite fools from around the Interwebs today. You might notice that Global Spin has a flavor today. You might even say there’s a hint of something feline. Well, you’d be correct.

Do not adjust your set. We have control of the language and the grammar. And we have a cheeseburger.

Update April 2: If you didn’t see the site yesterday, this may not make sense. All articles (including past posts and comments) were translated into LOLspeak by the excellent TFS LOLcat plugin for WordPress. So basically the whole site didn’t make sense, and this post fit right in.

The new endeavor, named Virgle, has been written up on the Google blog by Sir Richard Branson.

Radcliffs, get your rockets ready!