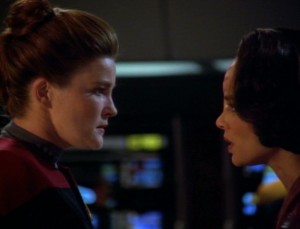 So I’m still looking for a sci-fi or fantasy film I’ve seen that passes the Bechdel Test. While I’m searching, let’s move on to something that seems easier at first glance: TV shows.

It’s almost trivial for a long-running show to pass the test; just have two women talk to each other about something other than a man in any episode. Some shows do better than others, though, passing the test in more individual episodes. END_OF_DOCUMENT_TOKEN_TO_BE_REPLACED

Lee shared this article and photo from Gizmodo today, and it resonates: 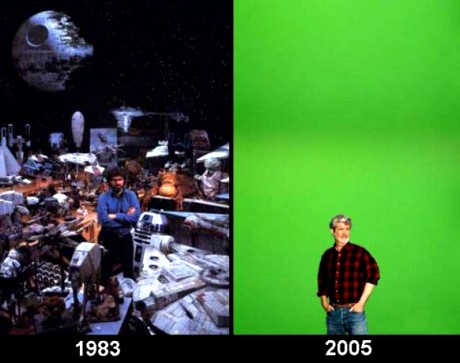 I’ve been thinking about this in terms of television shows lately. On the one hand, using CG and green screens is so much cheaper that it allows shoestring indie productions to look as good as big studio stuff. (See the indie-to-SciFi show Sanctuary for an example.) On the other hand, green screens make it harder for actors to get involved, and there are lots of ways to get the visuals subtly wrong.

So here’s my question: do we actually need the green screen anymore? There seem to be lots of “extended super special restored director’s cut” editions of existing shows and movies now, and plenty of YouTube remasters of even the crappiest pre-digital video. None of that stock had green screens or motion dots or matchmove data, so why can’t we shoot new video without all those things?

As an intermediate step, would it be possible to dress a set the way you might for a stage play, then fill in the screen-quality props and sets digitally? Can actors look out a cardboard window at a black cloth with stars painted on it, but viewers see a porthole with galaxies whizzing past? That way, you don’t have to make the decision between the on-stage prop and the virtual one until you’re in the editing room. Who knows? You might just decide to leave the cardboard in.

The Independent has a great interview with Russell T Davies, the executive producer of Doctor Who. He talks about Richard Dawkins, (pan)sexuality on the show, the new companion Donna, and a bunch more:

The Doctor makes millions for the BBC, so perhaps it should listen to Davies’s anger about the time it is now being shown – 40 minutes earlier than before, at 6.20pm. “It’s a shame. It’s a terrible slot. We will lose viewers. I am unhappy. We’ll see.” Expect to see it moved back, later in the run.

Other sci-fi writers make a point of praising their hardcore fans, but Davies can be very rude about them (look away now, Whovians). “It’s like having a swarm of fucking mosquitoes buzzing around you. It doesn’t stop you doing your job, but, Christ, they buzz!”

There are a few spoilers, but they’re more intriguing than revealing, certainly not worth avoiding the interview. We watched the first episode of Series 4 over the weekend, and I’m excited to see where it leads.

IGN has a compelling interview with Ron Moore about the writer’s strike and how it affects BSG. It’s an eye-opening piece, to me at least. Suddenly it’s very clear why this is such an important issue for writers:

“We got in this long, protracted thing and eventually they agreed to pay everybody involved. But then, as we got deeper into it, they said ‘But we’re not going to put any credits on it. You’re not going to be credited for this work. And we can use it later, in any fashion that we want.’ At which point I said ‘Well, then we’re done and I’m not going to deliver the webisodes to you.’ And they came and they took them out of the editing room anyway — which they have every right to do. They own the material — But it was that experience that really showed me that that’s what this is all about. If there’s not an agreement with the studios about the internet, that specifically says ‘This is covered material, you have to pay us a formula – whatever that formula turns out to be – for use of the material and how it’s all done,’ the studios will simply rape and pillage.”

There’s a lot more along those lines, so be sure to read the whole article if you get a chance. Moore makes an excellent point: TV is rapidly moving toward being just another Internet service. The studios are trying their best to get paid for Internet distribution, while trying even harder not to pay anyone down the line for it.