I just found some original footage from Star Wars. It’s in black and white, and the sound quality is cruddy, but it’s worth it to see Han’s girlfriend (or whomever she is) and to hear Greedo chatting with Han in an English accent. And yes, Han did shoot first.

I was just listening to A Way With Words, and I heard something that caught me completely off guard.  I’ve been complaining about gender-neutral singular pronouns for years, hoping that something like ‘ve’ would replace the awkward ‘he or she’ or the patently evil ‘s/he’.  Greg Egan aside, nothing ever took off.  It turns out that the verbivores have already solved this one to my satisfaction with an obvious (but previously maligned) choice: they.

To quote from Sex and the Singular Pronoun:

That settles it as far as I’m concerned.  I’m going to start using the singular they with impunity, and I’ll let anyone I meet know that they’re welcome to do so as well.  ˇViva la evolución!

It’s my first time linking to Newsvine, but this opinion piece is really well done: America Was Not Founded on the Ten Commandments.  The comments are worth a scan, too, though they devolve into the usual Newsvine shouting match.

My ordination sister, Kila, just founded The Foundation for the Advancement of Women in Religion. This foundation will offer scholarships, sponsorships and project funding for women who are working on religious issues (hint, hint Deana!). They are currently looking for members to join the organization to help get it off the ground. Their Board of Directors includes some impressive wimmin, including M. Macha Nightmare and Patricia Monaghan. Figured this group might want to click on over, take a look and maybe even join like I just did!

I just had to share this little mashup of George Says… and DubyaSpeak.com: 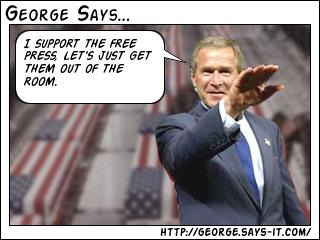 I have to laugh so I won’t cry.