This may seem like an odd diversion, but John asked about it just this morning so I thought I’d share with the rest of the class.

Electrons, in their secret life as wibbly-wobbly quantum particle-wavey things, have a property called spin. To quote a handy article I just ran across:

Among the many counterintuitive properties of the electron is the fact that it has spin one-half. This is the mathematical way of saying that if you rotate an electron through 360 degrees, it doesn’t look like it did before you started! There is no parallel for this in our everyday world – we are accustomed to being able to turn objects through 360 degrees and get them back to where they started.

Oh, but there is a parallel in the everyday world, or at least in my slightly-twisted mind. Think of it like so: 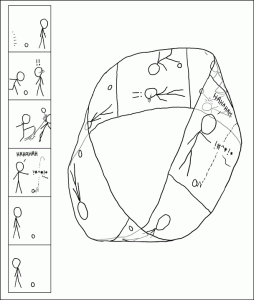 Does this mean that electrons are actually tiny loops of film? No. It only provides an analogy for this one property, and even then it might not go very far. Still, as soon as someone says “there is no X”, I have to find a counterexample. :)