I often see a word in print long before I hear it pronounced. That’s fine for most words—”antidisestablishmentarianism” isn’t actually that hard to deconstruct—but it can get me in trouble sometimes. For years I thought misled was pronounced “mizzled”, and I never did decide how envelope should sound.

Now that’s going to be a lot easier, thanks to a little programming trickery by John Tantalo. He created a handy bookmarklet that takes standard International Phonetic Alphabet (IPA) transcriptions (as found on many Wikipedia pages) and runs them through a text-to-speech (TTS) system to speak them aloud.

Checking a few known pronunciations against Wikipedia’s IPA for them, I see that either the TTS server or the listed IPA needs some work. I suspect the latter, because the IPA for the Niger River entry (/?na?d??r/) sounds great, while the IPA for Nagios (/?n???i.o?s/) sounds way off (as I write this at least). Still, most entries work great, and I expect this tool to encourage more authors to include IPA as it gets used.

Napa Valley Register did a write up about what’s been keeping me busy for the last month or so: Harvest Nights

(This is why I drop off the face of the planet for half of August and the months of September and October.) 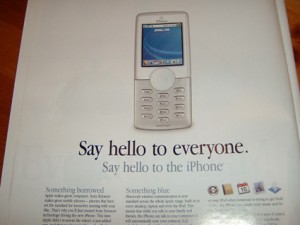 In 1998, Apple came out with an all-in-one computer. At the time, all-in-one computers were stripped down CPUs crammed onto a monitor case. The term made people expect something ugly, cheap, and difficult to upgrade. What they got instead was the iMac. It was revolutionary, and it inspired copies all across the industry.

In 2001, Apple came out with a portable MP3 player. There were plenty of MP3 players on the market, but none of them were particularly impressive. Initial reviews told people to expect an Apple offering that was too big, lacked features, and was way too expensive. What they got instead was the iPod. It was revolutionary, and MP3 players were never the same.

In 2007, Apple came out with a smartphone with an integrated iPod. By this time, people realized they should expect something revolutionary, but revolutions are tricky to predict. Rumor sites and pundits worked themselves into a frenzy telling people to expect an iPod with phone capabilities crammed in, or a phone with an iPod tacked on. What they got instead was the iPhone. It was revolutionary, but not the way anyone expected.

In 2009, Apple might come out with a tablet computer. As before, everyone and their dog is trying to guess what it might be like. We’re being told to expect a big iPhone, or a web tablet, or some kind of ebook reader. What I expect instead, based on all that’s gone before, is the unexpected.

While doing regular WordPress maintenance today, I finally bit the bullet and changed the post permalinks to something a bit more human-friendly. For example, the old and new URLs for a recent post are:

A bit nicer, right? Here’s the tricky part: the old URL still works, redirecting automatically so no one need get lost on their way in. I’d love to take credit for such a slick bit of business, but it was really simple thanks to Dean Lee’s Permalinks Migration Plugin.