Gov. Eliot Spitzer proposed legislation on Friday that would make New York the second state in the country to legally sanction same-sex marriage, fulfilling a longtime pledge to supporters of gay rights.

Mr. Spitzer has acknowledged that he does not expect the bill to pass the State Legislature and return to his desk anytime soon. Earlier this week, he said that he would submit the proposal anyway, “because it’s a statement of principle that I believe in, and I want to begin that dynamic.”

Those of you with an interest in things Chinese and para-Chinese (I’m looking at you. Ahem.) might be interested in reading the blog that anthropologist David K. Jordan has been maintaining while spending a semester teaching in Asia. It’s chock full of linguistic and religious observations, all with that pleasant snarkiness that DKJ has mastered.

The Doonesbury site has a often-funny “Say What?” snippet off in a corner.  I had to share today’s:

“For the majority leader of the United States Senate, in the time of war, with soldiers dying on the ground, announcing that we have lost the war, is very close to treasonous. I looked it up while we were driving over here, what the definition of ‘treason’ is. It’s the betrayal of trust.”
– Tom DeLay, 2007

“I cannot support a failed foreign policy….President Clinton has never explained to the American people why he was involving the US military in a civil war in a sovereign nation, other than to say it is for humanitarian reasons, a new military-foreign policy precedent. Was it worth it to stay in Vietnam to save face? What good has been accomplished so far? Absolutely nothing.”
– then-House Majority Whip Tom Delay, 1999, a month into the US mission in Kosovo

I read news from a bunch of different sources each day, including Google News, Reddit, and a whole host of blog feeds. Some items are worth commenting on here, but often I just want to say “hey, read this one” instead of finding something specific to comment on.

So, I’m going to try a new feature here on Global Spin: the News Roundup. Each post is a list of timely articles with excerpts but little or no commentary, perhaps updated over the course of the day. If you find them useful, let me know. If you find them annoying, mention that too.

Whether it be Subway sandwiches for the office staff or reimbursement for continuing education, gifts showered upon doctors by drug- and medical device-makers have become so pervasive that they are a standard part of virtually every U.S. physician’s practice.

Despite self-policing initiatives launched by organized medical groups and the drug and device makers to curb the cozy relationship between physicians and industry, 94 percent “or virtually all” physicians have at least one type of relationship with the drug industry, according to a study scheduled to be published Thursday in the New England Journal of Medicine.

For a few seconds on Thursday, astrophysicist Stephen Hawking expects to feel the exhilaration of escaping his paralysis and floating free in zero gravity. The 65-year-old was set Thursday to become the first person with a disability to experience the Zero Gravity Corp. flight.

Canada’s Conservative government said Wednesday it will cut greenhouse gas emissions 20 percent by 2020 and ban inefficient incandescent lightbulbs by 2012 as part of a national environmental initiative.

The plan, dubbed “Turning the Corner,” includes various measures to stop the rise of greenhouse gases in three to five years. Once the gases stop rising, the government plans to reduce them by 150 million tons by 2020, or about 20 percent the level of current emissions.

This makes me happy. There’s a whole blog, Paleo-Future.Com, that focuses on images of the future that people in the past have held. Lots of Disney stuff, of course, but other very fascinating pictures, videos, and other resources. 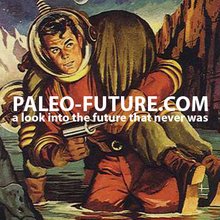