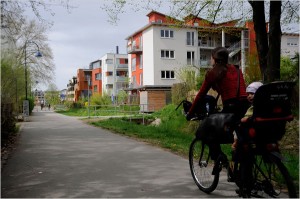 Brent pointed out this article in the New York Times about a carfree German suburb:

Street parking, driveways and home garages are generally forbidden in this experimental new district on the outskirts of Freiburg, near the French and Swiss borders. Vauban’s streets are completely “car-free” — except the main thoroughfare, where the tram to downtown Freiburg runs, and a few streets on one edge of the community. Car ownership is allowed, but there are only two places to park — large garages at the edge of the development, where a car-owner buys a space, for $40,000, along with a home.

Sound familiar? It’s the “car-lite” mode suggested by my favorite urban design manual, Carfree Cities. I’m glad to see communities implementing these principles in the real world; hopefully we can learn more about how to make places like this more common.

The city also looks well-placed as a destination for my upcoming (someday) architectural tour of Europe. Now if we could just get this silly dollar back up to its former value…

It might work if you’re a Montague or a Capulet, but for LGBT folks, marriage by any other name does not smell as sweet. Here’s the bottom line on why this issue is so important and pushes so many buttons:

That is, if LGBT folks can marry, it means that their relationships are legitimate. Socially sanctioned. Official. Recognized. Everything else hangs off of that. Everything.

“Domestic partnership” or “civil union,” regardless of how many rights they confer on the couple, does not carry the same weight that the word “marriage” has in our society or our psyches.

From an article in the L.A. Times last May:

Many gay Californians said that even the state’s broadly worded domestic partnership law provided only a second-class substitute for marriage. The court agreed.

Giving a different name, such as “domestic partnership,” to the “official family relationship” of same-sex couples imposes “appreciable harm” both on the couples and their children, the court said.

The distinction might cast “doubt on whether the official family relationship of same-sex couples enjoys dignity equal to that of opposite-sex couples,” [Chief Justice] George wrote . . .

The ruling cited a 60-year-old precedent that struck down a ban on interracial marriage in California.

Unfortunately, it looks like the CA Supreme Court (after making such a sweeping statement in the marriage cases that allowed LGBT marriage in CA in the first place!) will decide that Prop 8 is NOT a constitutional revision to the CA state constitution. Their argument being, in short, that LGBT folks have all the same rights under the CA domestic partnership, so what’s in a name? (You can see why the lawyers arguing the case were shocked to hear this reasoning after the Court’s decision last May.) It’s only taking away a little bit of the rights of a minority (i.e. suspect) class to let Prop 8 stand. And it’s not really a structural change to the CA constitution and therefore not really a revision. Plus, the “power of the people” is also a right and striking down Prop 8 would infringe on that. Here is a decent summary in the most recent issue of Time and a really good, more in-depth article in the L.A. Times.

Fortunately, the law is pretty clear on retroactive propositions in California: if retroactivity was not specifically stated in the proposition, then said proposition is not retroactive. Prop 8 does not have any language along those lines (regardless of the one weak statement in a rebuttal argument in a voter information pamphlet). This means that the 18,000 LGBT couples who married in California will most likely get to keep their marriages yet no more LGBT folks can get married.

So, I have a few questions for the Court: I wonder what happened to the power of the 48% of the people who voted against Prop 8? And splitting hairs on how much of a right we can take away? Once you open that door, where does it stop?

The state’s water supply has dropped precipitously of late. California is locked in the third year of one of its worst droughts on record, with reservoirs holding as little as 22% of capacity. On top of that, a federal judge in Fresno last year issued a ruling in an environmental lawsuit that could restrict diversions to farmers by as much as one-third, as part of an effort to save an endangered minnow, the Delta Smelt.

Keep in mind that at least half of the fresh produce in the United States comes from California! (Or so the gov’t is telling immigrants . . .)

Seems like we’re getting back to the future in style.

The Climate Friendly Cities is a project of the Green Renewable Independent Power Producers (GRIPP), a local non-government organization. In the Ecopolis episode, GRIPP Chairperson Athena Ballesteros explained that she envisioned GRIPP to address the pollution and noise problems that come with the 250,000 or so diesel-fed jeepneys clogging Philippine streets.

The project’s first component involves the use of electric-powered jeepneys – or eJeepneys. Their diesel engines cause traditional jeepneys to emit a lot of noise and smoke. In contrast, eJeepneys run on electric motors and emit barely any noise and no smoke at all. The project’s second component involves the installation of bio-digesters coupled to gas engines – essentially power plants that would convert organic trash to energy, producing electricity to run homes, offices, and, of course, the eJeepneys. The project’s third major component is a piece of land that will serve as the garage, maintenance area and charging station of the eJeepneys.

(via my friend Pia who is involved with this project in Manila.)

[Graph of my feed-reading habits over the last month, courtesy Google Reader.]

OK, maybe less “catching up” and more “declaring newsfeed bankruptcy.” I’ve been a wee bit busy for the past month or two (or three… shush!), and it’s not likely to let up for another month at least. Sorry about the relative radio silence. I still have stories to tell, just no time/energy/brain to tell them.

Why, you may ask? Well, if you don’t know already, prod me in the comments and I might post more detail about my current gut-wrenching life change, er, side project.