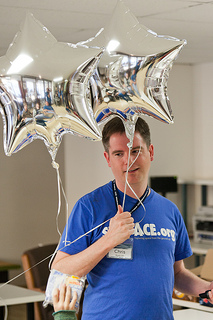 I’ve been the proprietor of Global Spin since 1992, when the name came to me in a dream about a magical CD player. I’m passionate about science, technology, space, architecture, transit, and the outdoors. I tend to have more ideas than time, a state which only gets worse as time passes.

I’ve written articles, papers, talks, and about six squillion blog posts. My first technology book (Perl for the Web, New Riders 2001) will probably be my last—they’re fun, but they don’t pay nearly enough—but there are still a few novels and screenplays clamoring to be written down. My most prominent recent writing gig was Geekdad, a Wired blog about passing along our passions to our children.

I currently work as a software engineering manager for Return Path and live in San Diego with my lovely wife Karen and our geeklet. I’m the founder of SpaceUp, the space unconference.

I can be found (and contacted) on the usual passel of social networks, including GitHub, Twitter, Tumblr, LinkedIn, Flickr, Google, and even Amazon. (Note that I didn’t mention Facebook.)