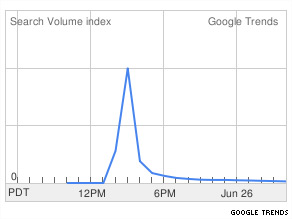 How did Twitter become crucial infrastructure? Seriously, wasn’t it just a month or two ago that Ashton Kutcher and Oprah threatened to drain all possible credibility out of the service? Wasn’t there much wailing and gnashing of teeth? So how did we get from there to the state department asking Twitter to delay a maintenance outage in order to support protests in Iran? I’m not making this up:

The U.S. State Department said on Tuesday it had contacted the social networking service Twitter to urge it to delay a planned upgrade that would have cut daytime service to Iranians who are disputing their election.

Of course, Clay Shirky understands what’s going on. He gets it so thoroughly that he described exactly what we’re seeing now, in fascinating detail, a month ago. Appropriately, TED gives a video record of his prescient talk:

Shirky presents the idea we’re all getting a crash course on this week: it’s nigh impossible to censor media if everyone produces it for instant distribution. It’s the flipside of the social phenomenon The Onion has poked fun at so well. Now that we’re all capable of reporting, everyone is always sharing everything, whether we like it or not.

These girls have some baaaadass moves! Enjoy!